Not so Bok* in Springbok

So we are running a sweepstake on how many breakdowns we will have between Cape Town and Tangiers. This is Number 1.

Friday night, on our way to the Namibian border, when the exhaust brake jammed, black smoke was pouring out of the engine and the temperature gauge was showing over 110 degrees, Sampson was fearing the worst. Things looked less grim in the morning when Nico Theron and Nellis Beukes, the mechanics recommended by our truck guru Martin Graham, said it would be safe to drive the 17km back to their workshop in Springbok north.

It took us a nerve-wracking 40 mins to cover the first 5km.  To say the Big Green Truck was limping along would be an understatement. Seriously, I could have walked faster. It was only after the fifth time he got out to manually pump the fuel that it occurred to Mark that this lack of power may have nothing to do with the (suspected) leaking head gasket. Indeed, before Nico returned, he’d fixed it – biodiesel had clogged a R30 filter that needs to be periodically replaced. PHEW. Power restored, Big Reg positively purred back into Springbok.

So, why had it taken us so long to get here you ask? Good question. We had been meandering through the dorps* of the Northern Cape. We ended up spending Wednesday in Vanrhynsdorp when Sampson decided to transfer some cooking oil in containers on the roof into the fuel tanks, and the filter pump housing cracked. On my morning walk the next day, I was charmed by the sights of Kamieskroon. (There will be more pics on the Africa Clockwise Facebook page as I still can’t figure out how to post photos side by side in WordPress – please someone enlighten me?) 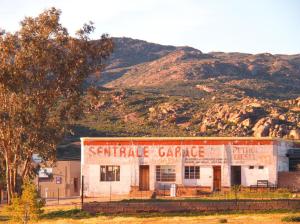 On the down side, Sampson got nailed by a superefficient traffic officer in Vredendal who was lurking on the main road and followed him out of town until he infringed the highway code. R500 for not coming to a complete standstill at a stop street at the bottom of a hill on a deserted road in the middle of nowhere at 9pm in a heavy truck. Good to see some officials in SA are still sticklers for the rules hey? Officer Van Der Westhuizen was gracious enough to sign as a witness in our Guinness World Record logbook.

So, when we got to Springbok on Thursday, we were all set to pay the fine, buy pump parts, stock up on vegetables and push on for the border. By Northern Cape standards, Springbok is a buzzing and cosmopolitan metropolis. There are bakkies* everywhere being loaded with stores for outlying farms and winkels*. 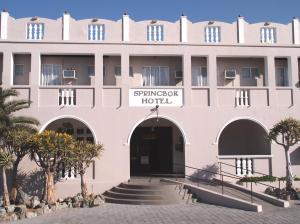 The kids had a ball in the local wholesalers, where they were allowed to pick R20 worth of sweets each for their ‘Friday Night Treats’ stash for the next few months. As usual, Ruby was completely paralysed by choice, and Zola went immediately for mints…

I greeted a Muslim mother walking with her three beautiful children all holding hands; later when our paths crossed again she stopped to ask me where I was from, as it seems few local people greet her with ‘Salaam Walaikum’. She was from Somalia, has been living in Springbok for 9 years and I was pleased to learn she felt safe here in this small town – ‘It’s the cities where you have to be careful.’

Zola is feeling a bit stared at, although he is greeted as enthusiastically by Northern Cape Rastas as he is by Ocean View’s. I comforted him that in the rest of the continent, it will be us three in the minority standing out like a sore thumb, not him.

Springbok is full of interesting contrasts. We went for a picnic on a hill that was more a pile of giant red rocks, and I was equally delighted and disgusted by the profusion of sunshine yellow daisies and litter. Both garland every gap. I would love to see Namakwaland in spring – it’s lovely now in mid-winter, so it must be glorious in September.

The shops look quite 1950s on the outside but are crammed full of absolutely everything you’ll ever need – Sampson said the hardware shop had a better range than any in Cape Town.  There’s also a 4m wide screen opposite the taxi rank playing Supersport highlights 24/7 like it’s Times Square. Bizarre.

The biggest contrast is the temperatures: T-shirt days and sleeping-in-everything-you-own-plus-fleecy-hat nights. My children have never seen frost before, and it’s quite something to see the cumulus clouds of breath in the truck in the early mornings before we make porridge to warm us up.

We reluctantly spent Friday here as well, waiting for a promised part that never arrived. By the evening, we’d had our fill of Springbok, and decided we’d go without it – but Springbok had other ideas… 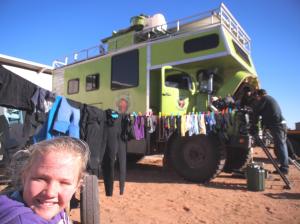 So here we are sat in the yard of the Boesmansland Werkswinkel holiday resort. Frik Callets and Thys Christiaan have taken the head off the engine and on Monday we’ll know if it needs to be skimmed. On the bright side, we’re being very constructive: Mark’s powerhosed spilt cooking oil off the roof, Zola’s done a lot of skateboarding, Ruby’s winning our Uno marathon and I’ve done some much needed sockwashing while enjoying a bonus edition of my favourite radio programme The African Connection with Richard Nwamba on SAfm. Onward and upward.

10 Responses to Not so Bok* in Springbok