Another country, another garage forecourt. We spent our first two days in Windhoek inside the vast premises of M + Z Motors in the Northern Industrial area. While it wasn’t the most restful of environments – they did think we were nuts doing yoga on the roof next to a revving diesel lorry – we thank the superefficient M + Z team from the bottom of our hearts for sorting out the exhaust brake, retorquing the head, rethreading broken bolts on the liftpump and fitting new V belts to replace the worryingly loose ones on our double alternator setup. The Big Green Truck is running like a dream and we are incredibly grateful to Wilfried Sell for the generous discount for us non-commercial travellers.

Many thanks to Wilfried Sell and the M + Z Motors team

It has taken Nambian experts (who know about driving in desert conditions) to identify the root of our problems: our truck has 6 cylinders plus a turbo in a space originally designed for a 5 cylinder engine. While that gives us about 20% more power, it also makes for a lot more heat. The engine needs a proportionately bigger radiator and fan, but there is no room for either. Michael Louw at Ernst Letch and Co sheetmetalworkers shook his head sadly and said there’s no space for a cowling so Big Reg will inevitably overheat going up hills. We must travel at the cooler times of day or, he advises, when the going gets tough, just take the bonnet off! We shall see…

Overheating is not something of immediate concern. I spoke too soon about the End of Socks. We were 200m above sea level at the border, but Windhoek is 1700m up. Brrrr. Blankets back out again.

The generosity of Namibia is what has struck me so far. Generosity of both proportions and portions. There is so much space! The population of Namibia is just over 2 million (compared to SA’s 56 million). That’s only 2 people per square kilometre. Windhoek is bigger than I expected, the people are taller and everything is more spread out. Even shacks here have big gaps between them. News bulletins last for half an hour, still with only three main stories, and the newspapers are thick and waffly. They even gave us an extra hour in our day!

Windhoek is reminiscent of Jo’burg, with its tree-lined boulevards and hazy red sundowns, but is surrounded by low mountains and very much more laid back. It’s very clean and there’s a R2500 fine for running a red light. One afternoon after school, M + Z’s driver Rheinard kindly chauffeured the kids and I into town and we walked around the National Art Gallery, and down Independence Avenue. Everything feels very familiar – with Pep, Shoprite, Spur and the Crazy store looking exactly the same as at home – but every now and then there is the shock of the new:  a proud Herero woman walking towards you in traditional dress with a bold-patterned floor-length skirt and matching headdress with horns like a young buck! Young funky urban Namibians sitting around in cafes in mixed groups having a beer remind me of Obs’ 20-somethings. The German influence on the capital is apparent in the cakes and pastry shops and the crisp seams on the trousers of a certain age group. We sat on the steps of the old Lutheran Christuskirche at sunset and wondered whose idea it was to build the giant gold Lego block right next door.

At the end of a weary second day at the mechanics, and our fifth school day in a row, it was an immense treat to be welcomed to Joe’s Beerhouse. Joe’s is a Windhoek institution, cosy yet secretly cavernous – I couldn’t believe it seats 500 and has five bars! Toasty by the log fire, our kids were openmouthed at the wilderness hanging from the walls and ceiling. It’s a veritable warren of wonder, crammed with a fascinating array of collectibles from the bawdy to the bizarre, alongside more genuine antiques than the Namakwaland Museum can boast.  Hostess with the mostess Carol-Jean Rechter spoiled us with a delicious meal of Namibian proportions as well as a gift of Joe’s own tin mugs, to send us off into the bush in high style. www.joesbeerhouse.com 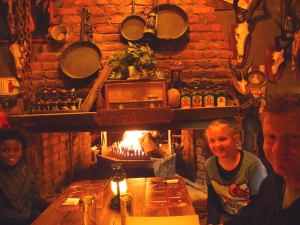 A warm welcome at Joe’s Beerhouse

Where did Joe find it all?

Joe’s Beerhouse also inaugurated the Contributors’ Roll of Honour, donating 300L of their used cooking oil to the cause. During the day it took Sampson and the intrepid Isaac to filter it all, Ruby made a friend. This is Kieue, he’s deaf and taught Ruby how to say ‘Namibia’ in sign language. Can you see it? Is that cool or what?

Kieue spells out his patriotism

Thanks to Carol-Jean, Thomas, Manfred and the whole Joe’s Beerhouse family for their hospitality

On phoning around for more contributions, we were shocked to discover that the majority of Windhoek restaurants pay to have their used oil picked up and poured into a landfill. Now there’s an economic opportunity for somebody – if there isn’t yet the market for it in Namibia, and they don’t want to sell it for soap or pigfeed, they could export it to biodiesel manufacturers in SA! Luckily, we were able to collect 140L from Ocean Basket in Post St Mall thanks to Wilka, Ray and Albius – despite the truck briefly getting wedged in this passage into the delivery bay. Eeek.

We’ve also picked up 60L from Mountain Eagle Spur in Maerua Mall, and 60L from Pick’n’Pay Auas Valley. Manager Angelo gets a special mention for including 20L of brand new cooking oil because he felt bad that they had less to give than originally promised! This will hopefully get Big Reg all the way to Luanda.

Thanks to Ms Suraya Khan at the SA High Commission, we were able to meet with Deutsche Hohere Privatschule teacher Carsten Antoni and the delightfully dynamic and interested youngsters of his Environmental Group. Sampson shared the secrets of the Big Green Truck, and they taught us how to say sandy blue elephant in Damara, one of Namibia’s official languages – it sounds like !twa !twa !twa !!! http://youthinkgreennam.org/namibia/

DHPS show what they think of Eco-Wasters

The most infamous exhibit hanging up at Joe’s Beerhouse is an old Mini. It belonged to two Portuguese guys who set out to travel across Africa from Maputo to Luanda about 12 years ago. They didn’t quite make it because they were refused entry at the Angolan border due to visa problems and had to drown their sorrows back at Joe’s. Let’s hope we avoid that fate…