How the Good Luck Fairy got legless

Of all the petrol stations in all of Angola, we were lucky enough to stumble into Hugo’s. Still in shock from the sudden death of Mark’s Mum, we were looking for water. We had neglected to top up our tanks as we had been anxious to cross the border as soon as possible. The first petrol station in Ondjiva turned us down because they didn’t have any water. That’s when we remembered there’s a drought on, and realised how foolish we had been. The next one was Hugo Ferreira’s PUMANGOL, and thankfully Hugo is the epitome of a businessman with a heart as well as a brain. Son of a Portuguese mother and Angolan father (who in turn had a Portuguese father and Angolan mother), Hugo was brought up mostly in Namibia and, luckily for us, his English is fluent. 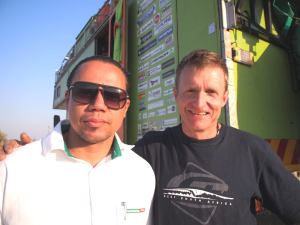 Hugo Ferreira our saviour at the haven of PUMANGOL Ondjiva

Hugo prefers life in Windhoek. He finds Angola a very frustrating place to do business – apparently the government keeps changing the rules to suit their cronies and their pockets – but the Nambian market is too small, so here he is. He manages the petrol station, but the main family business is a chain of bakeries selling the most divine-smelling bread in the country – a sublime torture for a coeliac like me. The kids had never tasted anything so delicious as the Ferreira Padaria’s fresh rolls, hot out of the oven. Hugo’s Dad is a war veteran who trained in intelligence in Cuba and recently received a brand new Toyota Landcruiser from the government as a thank you for the role he played.

That first night, Hugo allowed us to sleep on the forecourt and treated Sampson and the kids to a pizza as I sat in the truck processing my grief through writing – very uncharacteristically I felt I could not be with people. Mark’s way was to spend the next day filtering furiously. Admittedly, we did need to transfer the huge weight of donated used oil from the roof into the fuel tanks underneath the truck before tackling any dodgy roads. Hugo lent us several service station workers to help lift down 25 x 20kg containers, then it took the whole family the whole day to filter – see the process documented on the Guinness World Record page. Judging by the crowd, it was the most entertaining thing that had happened in Ondjiva for a while. 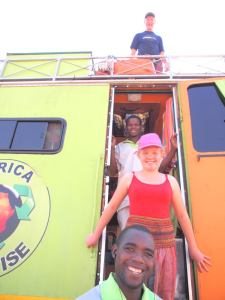 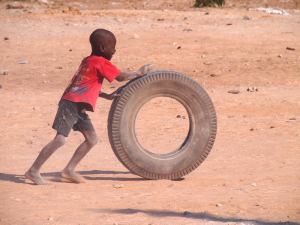 Admittedly there’s not much else to do round here

Sampson carried on working so late into the night, in the end I’m ashamed to say I got angry with him. We were already exhausted, and really didn’t need another marathon day or the hatch constantly open letting in mosquitos as he tramped stubbornly up and down trying to finish them all. In retrospect, I think he was in deep shock.

On Thursday, thankfully, he started crying properly. There was a vicious wind and I was able to persuade him to leave the rest of the filtering, and get going. It always feels better to be on the road, moving forward, however slowly. Hugo’s bakery had made a beautiful birthday cake for Ruby, but his biggest present was putting us in touch with Emilio Costa, the regional manager of PUMANGOL, who agreed to sponsor the Africa Clockwise adventure with water throughout the whole of Angola. OBRIGADA!

Thanks to Emilio Costa, Hugo and the team at PUMANGOL

We set off for Xagongo after school was done. Almost the first thing we saw was a rusty old tank by the side of the road. Gobsmacked to see such raw evidence of the brutal civil war still lying about, we backed up to take a photo, then felt a bit silly as we carried on to find many more burnt out wrecks scattered across the area.

Angola’s litter is weightier than Namibia’s

I’m having a bit of a love affair with trees on this trip. Having famously caused my one and only car crash by calling out ‘Look at those fabulous blossoms!’ and driving up the kerb, I now find myself quite obsessed by trees. So it’s a good job I wasn’t driving this stretch. On one of our morning walks in Springbok, we discovered a lone tree I found mesmerising, with its aloe spikes and peeling crazy paving trunk. I had no idea what it was but just fell in love with it and wanted to touch it and photograph it but I didn’t have the trusty Olympus PEN with me. I later realised it was a kokerboom or quiver tree. There’s a famous forest of them near Keetmanshoop in Namibia. It had such a presence of ancient wisdom I felt cowed.

Here in Angola, so wiped out with grief, it’s been comforting to watch the passing bush robe itself in autumnal colours and witness the advance of the baobabs. With bark like elephants’ hide and the attitude of the Whomping Willow, they dominate the landscape. There were also skinny trees with their hands up like a Munch painting, and graceful ballet-doing trees, and some others covered in fluff, but I don’t have pics of them as after the first day, Sampson refused to keep stopping the truck to let me get out and take any more. 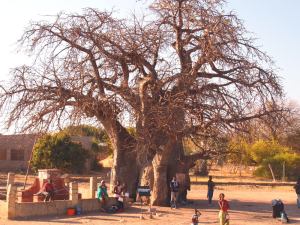 Baobabs become the centre of their community

This wasn’t even the biggest we’ve seen

The fat furry acorn is in fact a baby baobab fruit

A few kilometres beyond Humbe, we were suddenly pulled up short at the blocked end of the highway by a ‘Desvio’ sign. The expected couple of kilometres on dirt turned into a 2 day off-road marathon. We averaged about 15km per hour bumping along through the bush next to the half-built highway for the next 100km to Cahama. It was the first time Sampson engaged the 4WD and it was good to see how Big Reg held up under pressure. Our ‘lock down’ precautions all worked, and our plastic cups only rarely jumped off their hooks. The only real casualty was the wooden Good Luck Fairy given to me by my Mom. She hangs from a springy wire above the passenger seat, but got bounced so hard against the roof of the cab a couple of times, both her legs snapped off! 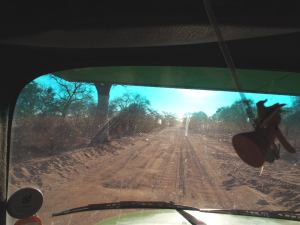 Legless Fairy bouncing to the right

By sunset, white dust clouds were rising so thickly, it was like being in the middle of some Dickensian fog. At one point, if it hadn’t been so hot, you could have mistaken the scene for snow. Thank God for our military grade tyres from Continental and our Dometic freezer – constant chilled water was a lifesaver.

Inevitably the rough ride caused some cooking oil to spill out of the donated containers (the one with lids rather than screw tops) onto the roof. The next day, Sampson used all straps given to us by Smartstraps and two rolls of rope from Freeform tents to make a web to lash them all down more firmly. The bad news is that it appears that cooking oil dissolves the glue backing of the aluminium waterproofing strips that Maxwell used to seal the roof. Since then, we’ve had oil dripping in through the hatches, the windows, and even through a cupboard. Gotta learn to love used oil in your sleeping bag on this trip! Looks like we’re going to have to reseal the roof yet again before we hit the rainy season. 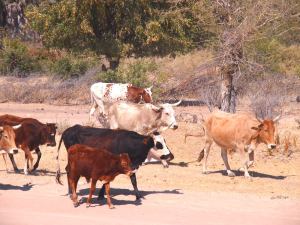 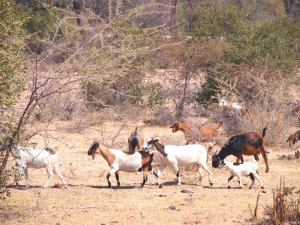 So we didn’t make it to the coast as planned in time for Ruby’s 12th birthday on Saturday, but we did have a cake and lots of toffees and movie night on Sampson’s laptop. That first evening, pulled over somewhere in the middle of nowhere beside a dirt road, the main highway through Angola for all the lorries thundering through the night down to the border, Ruby said ‘I’m glad you persuaded me to come on this trip Mom. It’s starting to be fun now’.

5 Responses to How the Good Luck Fairy got legless