Posted on September 10, 2013 by Africa Clockwise

On 1st Sept the rather uptight Immigration official at Ndangandanga, the last village in the DRC, jumped in the truck, took us up to the border, lifted a rusty steel boom and waved us through. He told the bloke with the gun to step outside of the photo I asked to take. We stopped in the middle of no-man’s land, a few kilometres in between, to bolster ourselves with lunch before tackling the next bit of bureaucracy. However the reception at Tombo Manianga in the Republic of Congo was far more relaxed.

Leaving the DRC at Ndangandanga

We passed a bar called Le Casino and everyone drinking outside on the stoep waved. About 20m further down the road we stopped at the barrier and waited while those same guys made their way up to open the immigration post. A most genial fellow in a spectacularly orange outfit read our explanation document with deep interest, wished us luck and waved us on. It was only later that evening I realised that I’d been too foggy with the meds to notice he hadn’t put any stamps in our passports.

Luckily, we’d only gone a couple more sweaty kilometres down the road, as when we crossed a bridge over a beautiful river, I begged to get out and dip in the water to clear my head. We all had such a lovely time, sitting in our pants in the rapids, we decided to quit early and stay the night there. The next morning, Sampson and the kids even had a go at fishing. 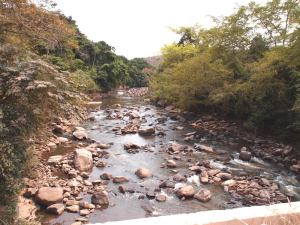 The river we couldn’t resist sitting in 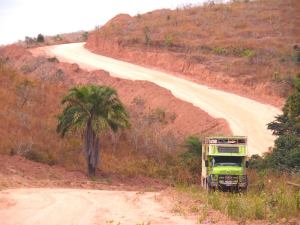 Not a bad spot to overnight

We drove back to the border post about 10am on Monday. The man in orange was still there, but today he was wearing a black T-shirt with ‘POLICE’ written on it, and clasping a two thirds’ empty bottle of Pernod. I enquired about the unmarked passports and he indicated the bloke next to him who hadn’t been there yesterday – apparently he was the guy authorized to stamp. This relaxed attitude very much set the scene for the Republic of Congo.

Small differences between the DRC and Congo were almost immediately apparent: houses were slightly bigger and sturdier, with plaster over the clay bricks, and even occasionally painted. Roadsigns appeared – these were fabulously reassuring; we never saw any in the DRC. 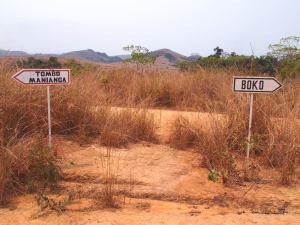 The endless road from the border into the Congo

We kept expecting to reach the end of the grueling road, but it just went on and on. Day two wasn’t quite as dicey as day one, but more exhausting because it was unrelenting. We were so glad to finally reach Boko; the solar-powered streetlights seemed rather incongruously modern after the wild road.

Here, there was a far more diligent official to deal with our carnet. In his precisely ironed shirt, M. Gabriel was most welcoming and amazed to hear that the truck runs on huile du cuisson. We went to register with Immigration and a man in a beautiful print suit took us to spend the night in the enclosure of the border police. We were shattered and went to bed early – thank goodness, because at 6 o’clock we were woken by RAIN! It was pelting down through the hatch – open at night for weeks now, it’s been so hot – so the heavy drops were splattering everywhere. It was action stations and all hands on deck scrambling to save books and cushions with lots of laughing.

It was wonderful to feel a bit chilly for a change; the kids enjoyed putting jeans on. Zola rather overcompensated with a woolly hat and scarf – he just wanted an excuse to wear them. It rained all day, and as we drove a blissfully tarred road from Boko to Kinkala, we thanked the spirits that watch over us that we hadn’t decided to spend another day at the river after all. Tackling that horrible last 50km through mud would’ve finished me off.

We were stopped by police three times between Kinkala and Brazzaville. Our roadblock routine is pretty polished now, and we never have any trouble. I bet people without trucks that run on cooking oil and cute brown-skinned children have a more difficult time. This is a double sucker punch that beats even the grumpiest. The first knocks the wind out of them, prompting a ‘Vraiment?’ and the second floors them completely. Who can resist a smile from Zola? Not the Captain of Police in Kinkala in his ¾ length fake-leather coat in the pouring rain.

We arrived in Brazzaville early afternoon, and fell in love with it almost immediately. Trees! Clean! Calm! Mostly I’m just so grateful it’s nothing like Luanda. There’s a far more cosmopolitan feel and it’s fabulously laid back. Hundreds of gleaming green and white taxis cruise around at a sedate pace, and there seems to be an abundance of tall people in gorgeous shoes. We are spoiled here on the edge of the diplomatic area; it’s very lush in all senses. 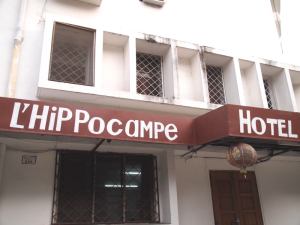 A touch of Oriental calm in the midst of African chaos

Hotel and Restaurant L’Hippocampe is an oasis of tranquility after the trauma of bad roads and bad meds. French owners Olivier and Julie have travelled themselves and compassionately offer a free berth to overlanders. This has been a priceless gift: a place to wash the dust off ourselves and the truck, both literally and metaphorically. Our kids are enjoying playing with the three children of the house, Nicholas 8, Chloe 7 and Alexandre 3. Best of all, their weekend buffet took Friday Night Treats to a whole new level: the three Sampsons gorged themselves on Vietnamese chicken, beef and noodles, not to mention several greedy helpings of crème caramel and fruit salad with lychees. 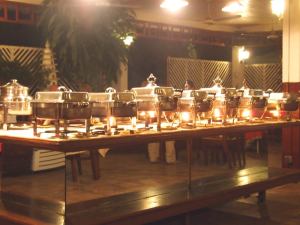 How tempting is that?

Olivier confirmed that the large ferry crossing at Kinshasa is expensive and hectic, and added that it involves cranes and ‘extra costs’ left, right and centre. It seems, with all the challenges, the way we came was still the best option. Their Livre D’Or containing hand-written tips from passing travellers is indeed worth its weight in gold. Check out some of these sites – these people’s adventures make our ambitions look tame: http://www.ouradventurebug.com, http://vikingsacrossafrica.webs.com, From Estonia With Love – as well as http://www.hippocampe.asia

We’ve chatted to some amazing people in the carpark. Frode from Denmark, who’s on a mission to visit every country in the world and scuba dive in as many of them as possible, is on about 165 of 193 and off to Chad and the Central African Republic this week. See http://www.frodeuhre.com

The loveliest person in the carpark is Achille, the security guard, who works here from 6am to 6pm every day and this week taught me how to cook foufou. It’s exactly like cooking pap but the fast food version – twice as sticky to stir, but done in 10 minutes!

Achilles showing us how it’s done 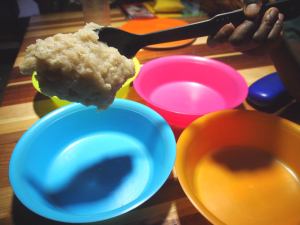 Dishing up the foufou – not easy to get off the spoon

I also had a fascinating conversation with Harouna Onedraego, a young man selling airtime on the street, who was excited to hear that Ruby and I were from South Africa, as he’d spent 4 months in Jo’burg looking for work. He’s from Burkina Faso and explained that, as the eldest son, it is his duty to provide for the rest of the family, so he’s constantly on the move trying to earn enough to support them back home. We agreed that most people in SA don’t realise how lucky they are.

I’ve spent a couple of days trekking round the embassies making enquiries about visa applications for the next few countries, which, thanks to copious notes left in the Livre d’Or by our oracle Bram the Belgian, have been relatively painless. WE LOVE GABON – their visas are free to South Africans. I dream of an AU passport like the EU one, allowing free roaming across borders of the United States of Africa…

Meanwhile, Sampson and the kids have been cleaning the truck – not an easy mission, what with the dust of Congo and DRC encrusted in the old cooking oil from Namibia spilt all over the roof and down the sides in Angola. Thanks to soap donated by Transfuel, and water by Hippocampe, Big Reg is shining again, and ready for his next photo opp.

As I’m two thirds of Sampson’s weight and twice as sensitive, I’ve dropped the dose of malaria meds to a quarter of what he’s taking, and slowly trying to get used to it. I’ve been very thankful to ProBio for their donation of Digestive Probiotics, concentrated fermented extract in a bottle which we keep in the fridge at all times. It’s great for kids with upset stomachs, and I’ve been swigging it three times a day this past week to balance out the heavy side effects of the Doxy on my system.

On Sunday night, Ruby went down suddenly with fever, vomiting and diarrhoea. It didn’t touch 40 degrees Celsius, but was high enough for me to be applying wet flannels on rotation in an attempt to cool her down when the paracetemol/ibuprofen combo wasn’t touching the sides. At 4am we did a malaria test and I was all ready to take her to hospital, but thankfully it was negative. At 8am, a kind French doctor friend of Olivier confirmed the diagnosis with a second test. She has a virus, very common round here and will be in bed for another couple of days. Now the scary bad-parents-beating-yourself-up-for-bringing-your-children-into-danger waking hours are past, we’re rather enjoying the peace: lying listening to Harry Potter audiobooks on the iPod, Ruby has never been this quiet for this long in her life! 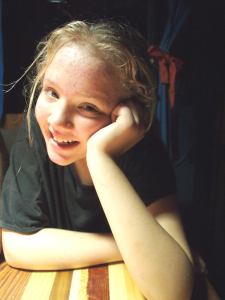 A few people have been asking why there are so few pics of me in this blog. Well I love taking photos but I sincerely hate posing for them, especially in my current state. I’ve had Big Curly Hair for most of my life, but in January, with this trip on the horizon, I gave myself a Sinead O’Connor shave. I thought, as there weren’t going to be hairdressers handily en route every 6 weeks to touch up my roots, it was time to Embrace The Grey. I really enjoyed going around my community incognito; no one recognised me!

By the time we left I was looking more like Elvis with a rather excessive quiff. By Angola, I’d catch a glimpse of myself in the small mirror on the wardrobe and be reminded of a PE teacher circa 1984 (i.e. my Dad). Now the likeness is verging on an etching of a mad 18th century  composer. Until I can get it into a ponytail, the worst months are to come: ancient Little Orphan Annie. Believe me, you don’t want to see it.

8 Responses to At L’Haven Hippocampe