This One’s For Joe

I’m loving walking on Fish Hoek beach every day, further and at a faster pace than the Liberian climate will allow. I love witnessing the ebb and flow of the tides, the clouds, the birds wheeling to and fro in their hundreds preparing to migrate. But I’m not used to so much company. There are dozens of early morning dog-walkers, not to mention the dogged swimmers (average age 75) who go for a dip every morning no matter what the temperature. 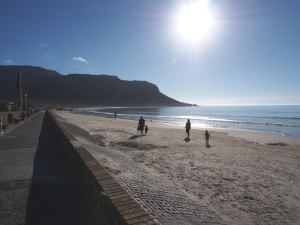 My first week back, as I caught up with an elderly couple walking ahead of me, the woman suddenly turned to me and said in a high-pitched whine “Have you ever seen such a disgusting coastline?”

Taken aback, images of soiled beaches in Benin, Togo and Ghana flashed to mind as I answered truthfully “Well, yes, I have actually”. She turned away. Only on my way back did I notice the few sweet wrappers from one wind-tumbled bin that must have offended her.

There are no twig brooms for the city of Cape Town. There is a busy team of five or six from the Extended Public Works Programme on permanent kelp-collecting duty, keeping the beach immaculate most of the time. But still Fish Hoek complains.

At what point does a hero of the liberation struggle morph into a power-drunk autocrat? Was there a moment that Zimbabweans could pinpoint, when Mugabe went over the edge? Or when Ugandans saw the writing on the wall with Museveni? That moment where we suddenly realise our president sees himself elevated above the law?

President Nkurunziza of Burundi’s attack of third-term-itis is hardly an unusual occurrence on our continent: the rulers of Angola and Equatorial Guinea have held onto power for 36 years, Zimbabwe’s for 35, Cameroon’s for 33. The presidents of Togo and Sudan were both recently re-elected to third terms in dubious circumstances with those of Gambia, Djibouti, Chad, Rwanda and DRC angling to follow suit. On the bright side, longstanding leaders in Burkina Faso and Benin have recently had to back down from standing again due to popular pressure.

What I want to know is: will the SA public wait for Zuma to announce he’s standing for a third term before they go out onto the streets to protest his increasingly arrogant behaviour? To witness his tone of voice while speaking in Parliament on 26th May, claiming respect for “our good friends the opposition” while dripping sarcasm and veiled menace – his hollow laughs showing teeth like a crocodile – was to see hubris in action.

This performance came the day before the release of the delayed report of the police minister about alleged ‘security upgrades’ to his private residence (including the infamous ‘fire’pool) which cleared him of all wrongdoing. This conclusion was directly opposed to that of the Public Protector, our heroine Thuli Madonsela, who last year found he had “unduly benefitted” from the R246 million spent by the state, sparking the Economic Freedom Fighters’ campaign to make him #PayBackTheMoney.

For three years, the President has refused to be called to account for Nkandla and even employed signal jamming and bodily ejections of EFF MPs by ‘security’ to avoid answering awkward questions during his State of the Nation address in February this year. But somehow I found this overt demonstration of his contempt for the South African people and state institutions more disturbing. Nearly as disturbing as their acquiescence.

A word from our sponsors: kindness

This week’s blog is brought to you by two lovely men. One is my husband Mark a.k.a. Sampson who has made all the difference to my month by counteracting relentlessly depressing political developments with daily dollops of love and tenderness. And silliness. And ‘pizza potatoes’. I’m not one for public relationship revelations, but I would like to take this opportunity to say: I adore you Hubster, you are my sunshine; let’s keep trucking. 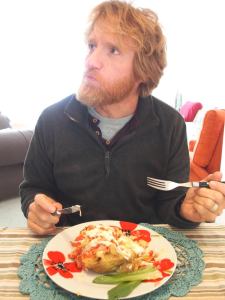 Gordon Ramsay’s got f’all on me

Another lovely man did me two great favours this week: firstly he cheered my children in exam week one by bringing our piano back; secondly he insisted I carry on sharing my stories on this blog. It’s wonderful to know someone out there is listening. Thanks Joe.

Meanwhile, back at the beach

June 1st is the official start of winter in SA. There was a terrific storm on Tuesday, with thrashing rain and wind so strong at the beach I had to abandon T’ai Chi as I was getting blown over. The forecast continued torrential but Wednesday dawned bizarrely sunny and briefly windfree. On the way back from my walk, I came upon a large and portly seal apparently washed up amidst mountains of kelp. He was venerably whiskered, but didn’t seem very old; onlookers couldn’t tell if he was injured or just exhausted from battling the storms at sea. He sat defensively upright at the foot of the dunes barking at dogs that dared approach. 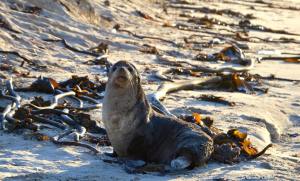 Apart from my usual amazement at how white people in this country flock with concern when they see a wild animal in distress – when many would almost certainly walk past a brown man languishing in a similar way – what struck me most was how the seal bared his teeth so convincingly. He was in no shape to fight anyone, possibly even at the end of his tether. But the circling dogs believed his show of strength, and kept away.

4 Responses to This One’s For Joe