The edge of the Sahara in midsummer feels a bit like Jo’burg in midwinter: it’s really dry, cold at night and you start the day by piling on layers which you then have to strip off in the hot mid-afternoon. We got chapped lips.

The guys in the distance brewing tea did not approach us. They were sievers – working in holes across the landscape towards the sea chucking spadefuls of sand against upright rectangular sieves creating piles of fine shells for building.

Can you see them, next to the piles of shells across the landscape? 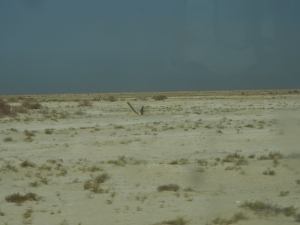 Need a more powerful zoom, but you can still see this has got to be amongst top ten worst jobs in the world.

As we trundled through the open desert that first day, I reflected that there was something seductive about the endlessly receding empty horizon. It was so hypnotic, so calming. They should hold mindfulness courses out here, because it’s so much easier to empty your mind and just be.

Driving through the Sahara 1: Calm…

Driving through the Sahara 2: Calmer… 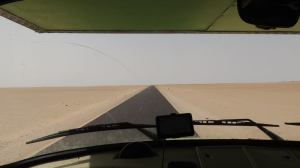 Driving through the Sahara 3: Ommmmm…zzzzzz

We found it hilarious how triangular Saharan road signs warn you of gradients less than flat and curves in the road that are anything less straight than a ruler. For example:

BEWARE: AN ACTUAL CURVE AHEAD! 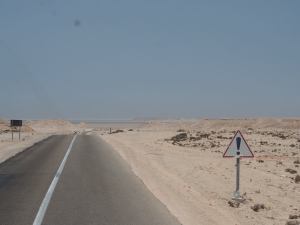 Wikipedia says “Approximately three quarters of Mauritania is desert or semi-desert. As a result of extended, severe drought, the desert has been expanding since the mid-1960s. To the west, between the ocean and the plateaus, are alternating areas of clayey plains (regs) and sand dunes (ergs), some of which shift from place to place, gradually moved by high winds. The dunes generally increase in size and mobility toward the north.” 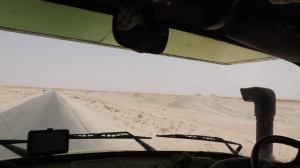 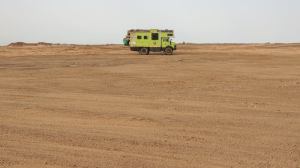 On the second day, the wind started. It blew constantly for the next 15 days. By the time we reached the capital Nouakchott on third, I had already decided I could never live in Mauritania. Despite the straightness of the road, I felt I was slowly going completely round the bend.

Going round the windswept bend

I’m not built for the desert; without camel eyelashes, I get the hump

No wonder the majority of desert-dwellers are nomads. I reckon they just keep moving to take their mind off the wind. Forget the Cape Doctor. This was the Saharan Sociopath. Guaranteed to blow your mind. By day ten I was reduced to stabbing myself in the eye with a… but I’m getting ahead of myself. 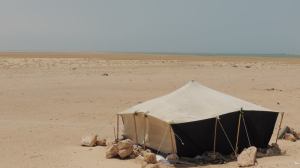 The howling wind overnight made it difficult to sleep soundly because the truck rocking kept making me think someone was climbing up on the roof. There was no respite on waking either. 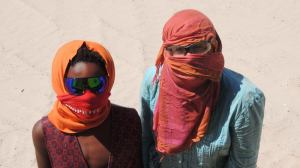 On 14th June, the kids celebrated their grandparents’ wedding anniversary with some chaotic sand dune sledging. I think Reg would’ve been proud.

Zola valiantly setting out against the wind with a seat cushion… 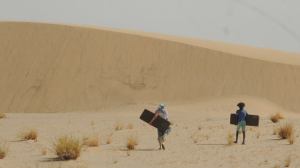 Which didn’t prove so successful…

You can check some video of their attempts here. I shall never forgive myself for missing Zola’s very fast first descent on his surfboard – he was even carving! After surfing down a dune on it, Ruby sat on the bench seat behind us in the cab pursuing the ongoing debate about her future – we all knew it was time for her to go back to school, but where? 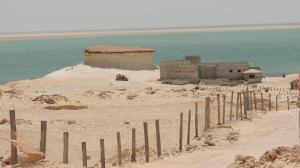 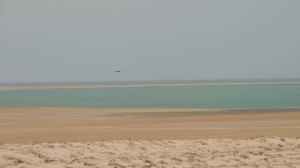 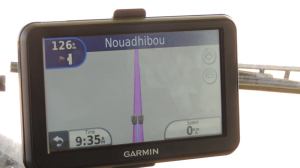 Early sun made Mauritania’s northernmost city of Nouadhibou look as bleak as Nouakchott. We’d been through so many road blocks, we were on our last set of fiches, so we trawled the main street searching for a papileteria to do photocopies. An old man in a grocery store really didn’t want to talk to this lone woman, and waved me out peremptorily, but a younger guy on the street gave me directions. Further down the road, another bloke was not at all keen on us parking outside his garage – Mauritania certainly seemed far less friendly than Senegal. Inside the shop, three young women sat on the floor giggling. They were strangely incurious – or at least showing a distinct lack of curiosity about me. The darkest complexioned one sat slightly apart from the other two. Was she the family slave, I wondered?

The prettiest bit of Nouadhibou

still didn’t win me over to Mauritania

Women were looking dramatically different from their elegant sisters in Senegal. We had been told that Mauritanian girls are praised for their girth and fattened for marriage but it still came as a shock to see paleskinned, lumpy ladies in wedgy black clogs, swaddled in layers of clothing topped with a flappy nylon wrap which was constantly having to be rearranged because of the howling wind. It was so impractical; I couldn’t understand why the heavy duty cottons of West Africa had been superseded, when they would be less at the mercy of the elements. Many of these dumpy women also sported woolly gloves in a clashing colour (e.g. pink with a lime green wrap). Their lack of style, indeed their apparent pride in deliberately making no attempt to be ‘fashionable’, reminded me of ultra-Orthodox Jewish women I used to see in north London years ago.

Outside Sampson was doing a magic trick for a sad-looking dark skinned boy in a doorway. I couldn’t stop looking around thinking that perhaps 1 in 5 of these people are enslaved. 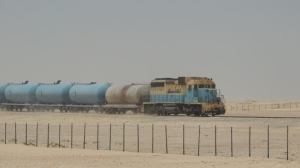 Nouadhibou is connected by railway to the iron mines in Zouérat, 670 km to the east.

The freight trains can be as long as 3km, reputedly the longest in the world.

We drove right to the end of the peninsula looking for somewhere to park off for the night and became concerned about the terrible crunchy noises that started happening when Big Reg turned off the road.

Alain, the owner of the lot we parked outside, promised to get his mechanic to come in the morning. Philosophically, we put off worrying till then, ate supper and indulged in an Elementary marathon.

This didn’t officially count as a breakdown, as luckily it didn’t hold us up 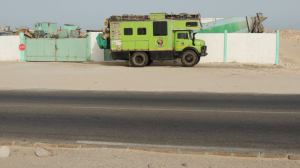 Not quite sure what Alain kept in his lot, though it looked like missile launchers…

It was quite a surreal spot

with a charming view of the city…

Mechanic M. Samba arrived promptly at 9am, a lovely gentle man with a bobbing head, who reminded me of a certain Mr Fatti. We went for drive to show him the crunchy noise, which of course had now stopped. But he set to checking all the screws and found one that connected the motor could be turned by hand and the part that young Nigerian mechanic had fixed for us in Lagos had got very loose. So, 5000Um (R200) well spent. 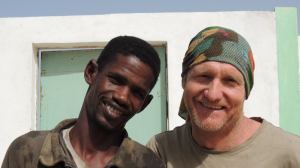 Thanks a million M. Samba!

When the bank told me they only changed dollars and euros, lovely manager M. Barakali offered to take me in his car to a money changer at the other end of town. I did wonder if I was mad to get into a car with two unknown men (M. Barakali and his friend M. Said), but he swapped me 1000 Md (Moroccan dirhams) for 36000Um before I even gave him any money, bless him. So it seemed my instincts were back on track…

We set out cheerfully for the border, which M. Barakali had warned me was “the worst road you’ll ever see in your entire life”. After dropping a couple of sets of fiches we finally took the left turn towards Dahkla and passed a long queue of lorries. Leaving Mauritania was a cinch: passport details were entered and our biometric details checked off, officials expressed great respect for the project, loved Sampson’s magic and shook hands…

Customs stamped our carnet, then at the last gendarmerie poste, there was an eager posse of six officials. While the big feller was eulogising Winnie Mandela, another guy was ogling Zola (looking cute in his cap) and finally offered to take him. “Jamais” I said firmly, “Never”. Then the first bloke asked if Ruby was available…? Sampson broke the tension with “What about me? No one wants me??” The guy hugged him and it was funny despite the underlying horror. I tried not to show the kids how freaked out I was.

We hopped back into Big Reg and set off across No Man’s Land, the section M. Barakali had warned us about. He’d never seen the Road to Foulamori, but we take his point. He’d told us to beware of getting stuck in soft sand but worse was the hard hard rock and lack of any clear track. There were huge lorries lurching all over the place, always in a hurry to get on, looping between piles of tyres and scrap cars and dead computers. 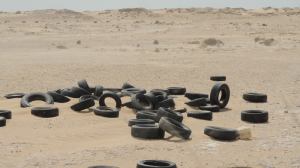 the hundreds of scrap cars on the ridge… 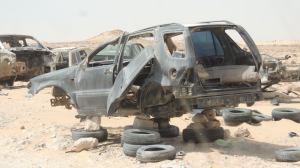 it was a surreal trip

There was great camaraderie with fellow truck drivers as we waved and bounced and rocked across – one gave us a strong arm salute! It took Big Reg half an hour to cover the 2-3km. We arrived just before 4pm which was when the border was supposed to shut but another driver told us it had shut at 3.30. We were now stuck overnight outside the gate – good job we have a house in tow!

On 16th June, thanks to entering Senegal twice around The Gambia, we made our 20th border crossing into our 19th and 20th countries. Officially we were moving from Mauritania into Morocco. But as far as South Africa is concerned, we’d just entered the occupied territory of Western Sahara.

(Yes, loyal readers, I am nearly a whole year behind with the story at this point – life and M.E. can do that to you.  But fear not, I have a cunning plan to bounce back up to date very soon… wish me luck.)

This entry was posted in 18 Mauritania and tagged Mauritanian women, Nouadhibou, sand boarding, travelling across the Sahara, travelling Africa, travelling with children. Bookmark the permalink.