Posted on September 19, 2014 by Africa Clockwise

Now I know I said I wasn’t going to post as often, but this is just a quickie to correct any less-than-effervescent impressions evinced by my recent reflections about life in Sampson’s home town, the delightful village of St Newlyn East. I wrote the last blog on a rainy day, Sept 1st. Since then, I swear, it has been sunny every single day. This Indian summer has made it easier to adjust back into a suburban English routine, despite all my reservations. 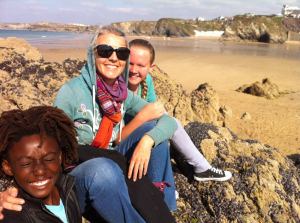 Sampsons enjoying the sun on the rocks at Towan beach, Newquay. Yes we are wearing jackets and socks and yes there are people in bikinis behind us.

Things I can’t help loving about being here:

1. Appliances i) the teasmade. I remember my Nan had one, and I don’t know whether this makes me officially old, but the joy I get from this cute little machine that pops out my hot water and lemon in 30 seconds every morning seems out of all proportion to its size. It’s bliss to sit cosy in bed sipping away watching the sun climb over the trees.

ii) the washing machine. Oh dear, I’m so getting used to all this extra time I have not having to spend several days a month handwashing. It’s gonna be tough to go back to it!

iii) the wifi. It may be patchy, but it’s on. Always. Sampson is busy downloading next year’s Truck Box Office selection.

2. Early morning walks down narrow lanes looking out over misty fields. The smell of England’s green and pleasant land. Eating blackberries fresh off the bramble for breakfast.

and this. Beeyootiful ain’t it?

3. Chapel coffee morning. The same ladies who helped my mother-in-law deck the St Newlyn East Methodist Hall in flowers for our wedding are still here, sixteen years later, sharing a crowded weekly chat over tea and biscuits, alongside a couple of gentlemen who remind me of characters from one of those idiosyncratic BBC comedy sketch shows. Bless ‘em for their kindness and for calling me ‘young lady’. 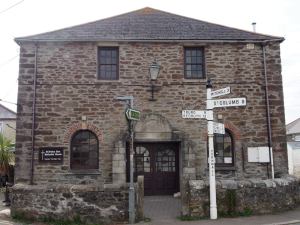 St. Newlyn East Chapel. Sampson and I got married in there! 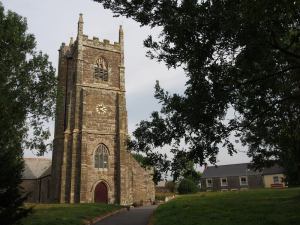 4. The foooooood. With careful juggling of deals in rival supermarkets, you can live cheaper here than in SA, groceries-wise. Sampson and I have been entertaining ourselves trying to out do each other’s bargains. Mine usually involve fruit or tins, his usually focus on cheese and chocolate. We’ve not got any scales here but I can tell from the tightness of my jeans that I have put on several kilos already.

Trying not to be tempted to Sunday lunch at the pub 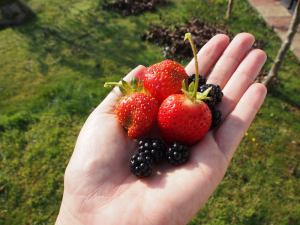 Bonus bounty from the garden!

5. The way English kids come to the door to ask if Ruby and Zola are coming out to play after school. It’s so lovely this feature of my childhood is alive and well in this village.

6. Blissful quiet time alone with my husband. The kids are at the park with their mates!

7. Radio 4 classic serials and comedy shows and Woman’s Hour and programmes about everything from Gramsci to Gormenghast. Only in England.

8. Baths. The calm they bestow almost make up for being cold enough to have one.

9. A Room Of One’s Own. Good both for writing and conjugal rights…

10. Having mates nearby. Fun with friends is a priceless boon – and not just for the kids.

Ruby has been baking with new friends Libby and Sacha and selling cupcakes all over the village!

Of course they’re lapping it up. To be part of the posse of 7-17 year olds who hang out at the park is a dream come true for Ruby, who delights in a never-ending supply of company. There’s also a magnificent purpose-built skate ramp there and Zola has become completely obsessed with skateboarding.

On Monday morning it took him 1 hour 45 minutes to do his Maths. By Thursday he’d worked out that the quicker he got through lessons, the quicker he could get down the skate park. He was up working by quarter to seven and in 1 hour 45 mins had done four subjects! How keen? Skating is a wonderful channel for his energy as well as a wonderful way to impress other boys. And girls. We’ve noticed he’s suddenly much chattier with Ruby’s friends too!

These last two weekends, we’ve also been savouring the specialness of simply hanging out with friends. Sampson’s best mate from school, Aaron, suggested we go with his wife Joe to a ‘Silent Disco’ down at the Fistral Beach Bar. If you’ve never been to one, seize any opportunity to do so: it’s absolutely hilarious.

The concept is that everyone is given a set of headphones to listen to two rival DJs playing music broadcast via radio transmitter. There is a switch to flip between them, so if you don’t like what’s playing on one channel you can swap to the other. They compete to get a majority of the dancers rocking to their beat. Because the music is always mobile, the party can continue on the balcony and even in the toilet!

What I love about it is that if you just want to chat, you can sit with your headphones off, having a good gossip with your mates and you don’t need to shout at all – BRILLIANT! Sampson loved watching all the loonies gyrating in the quiet. Silent Disco turns people into far more extrovert dancers, because you have to demonstrate that you love what you’re dancing to in order to persuade your mates to join in. It’s wonderful to see the ebb and flow as people wonder what’s going on ‘on the other side’ and switch to the other channel, like a Mexican wave of infectious groove.

I haven’t laughed so much in ages. It helped that the tunes were mostly great, infallible dance classics, loads of 70s funk as well as 80s/90s dance floor fillers and epic anthems. This meant the clientele ranged from 20 to 60 with a majority being in their 30s and 40s, but it was wonderful also to see a cute Zoe Deschanel lookalike and her hipster boyfriend dancing with her leopard-print-jumpsuit-wearing mother (very Scissor Sisters). It was that kind of anything-goes nothing-too-precious atmosphere.

Sampson got his hips wiggling to Talking Heads and I remembered how Salt’n’Pepa rocked “What a man, what a man, what a man, what a mighty good man!” It was such fun when half the people started getting down on the floor and rowing along to “Oops Up Side Your Head” when the other half were still wailing along to “You gotta fight… for your right… to parrrrrrrtyyy”. It was equally a joy to tune OUT of Bon Jovi’s Living on a Prayer and zone into Frank Sinatra’s New York New York with the girls high kicking on the balcony. But the highlight of course, was Bohemian Rhapsody: sliding your earphones half off to listen to everyone sing along, completely out of tune. Hahahahahahahahahahahaha!

‘Dance like nobody’s watching’ is not as freeing as ‘dance like nobody’s listening’: you could see Silent Disco as a metaphor for life and remind yourself that’s everything’s more fun when you stop worrying what other people think and just let go and dance to your own groove. Or you could be less pretentious and just be grateful for friends who remind you that life is about seizing a moment of joy in being alive and experiencing the craziness of those LOL moments together.

We ‘danced all night’ – or as near as we get to that these days. Thanks to a caffeine fix of a couple of squares of dark chocolate thoughtfully provided by my husband at 10pm so I could keep up with the drinkers, we made the most of the babysitters and got to bed at 3am. Cheers Boylanauts!

Meanwhile, on Sept 8th the WHO warned of a looming “exponential increase” in Ebola cases in countries with hopelessly inadequate health systems such as Liberia (with 1 doctor per 100 000 people) http://www.who.int/mediacentre/news/ebola/8-september-2014/en/ By Sept 9th the Ebola death toll had reached 2300 across Liberia, Guinea, Sierra Leone and Nigeria. By Sept 12th it was 2400. On Sept 16th the WHO announced that 5000 were now infected and fatalities had topped 2500. Finally, on 17th the US announced it was following China to send personnel to help, and treating Ebola, to quote President Obama, as “a threat to global security”…

For me the biggest news of the week was the report that greenhouse gas levels were rising at their fastest rate in thirty years, due not only to increased emissions but also to a reduced carbon uptake by the Earth’s biosphere, which could be reaching its limit according to the World Meteorological Organisation http://www.bbc.co.uk/news/science-environment-29115845. But relatively scant attention was paid to this or ‘the century’s worse flood’ in Jammu and Kashmir, caused by a combination of bad planning and climate change.

Admittedly, there was a lot of other news this week. Sampson and I are more thankful than words can say that ten years ago we decided against calling our baby son ‘Oscar’, our first choice English name, and went with an isiXhosa one that suited him better. Whatever the finer points of law at issue, I feel the weight of common sense and human compassion should have dictated a different verdict. The pandemic of violence against women in South Africa makes the Ebola virus look like a minor cough in terms of the numbers of blighted lives.

And if you’re wondering why I have so far stayed silent on these islands’ biggest debate of the week? Fear not, your intrepid adventurer is currently on a coach to Scotland to visit my best friend from school, and see which way the saltire is flying…

N.B. ‘Kernow’ is the Old Cornish word for Cornwall, and another also-ran for Zola’s christening. The independent Cornish party called Mabyon Kernow has had a shot in the arm with all the talk of ‘Devo Max’ https://www.mebyonkernow.org

This entry was posted in 12a UK and tagged Cornwall, Ebola, Silent Disco, St Newlyn East. Bookmark the permalink.