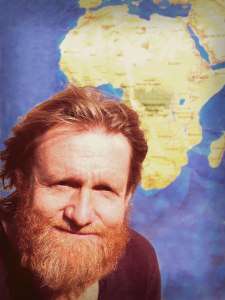 The beard is back in the hood!

In July 2013 comedian Mark Sampson left Cape Town to go AFRICA CLOCKWISE: drive clockwise around the continent with his family in their Big Green Truck which runs on waste vegetable oil – that they collect themselves en route – in an attempt to break the Guinness World Record for the longest journey made on alternative fuel.

So far the Sampson family – Mark, his wife Sam Pearce and their two children – have travelled 16000 km, crossed 12 countries and broken down 10 times. They’ve survived a flying solar panel in Namibia, a wheel coming loose in Angola, an AK47-wielding bandit in the DRC, getting stuck on the ferry across the Congo, being bitten by scores of jungle bugs in Gabon, waist-high mud in Cameroon, a tourist-infested Voodoun festival in Benin, a scorpion bite in Togo, a thumping madman in Ghana and malaria plus typhoid in Cote d’Ivoire.

But mostly they’ve enjoyed warm African hospitality wherever they’ve been, fabulous surf and palm-fringed perfection at beaches all along the West Coast, and Christmas at the continent’s most spectacular street party, the Calabar Carnival in Nigeria.

Former Covent Garden busker Sampson has entertained at high schools and South African embassies along the way, while performing impromptu magic shows with his kids in villages where they’ve stayed and at hundreds of police roadblocks. They have never paid a bribe.

The Sampsons were forced to suspend their trek temporarily due to travel restrictions around the Ebola pandemic, but intend returning to Liberia in October. Take this opportunity to catch up with Mark Sampson in a fun Q&A format at:

This entry was posted in 12b South Africa and tagged An Audience With Mark Sampson. Bookmark the permalink.