Posted on December 1, 2015 by Africa Clockwise

My favourite times of day have always been dawn and dusk, but in West Africa you have to be paying close attention or else you’ll miss them. Sunrise happens so quickly that I can get up in the pitch dark around 6am, clean my teeth, put my T’ai Chi clothes on, jump out the truck and still be too late to catch the sky at its peak of glorious peach and orange. Likewise there are no lingering summer sunsets stretching from what my English cousin calls “wine o’clock” – that moment when you lean back and decide you’ve done quite enough for today and it’s time to relax. The afternoon transitions from unbearably hot at 2pm to nearly bearable at 3pm to golden perfection at 4pm. We have christened this moment “coconut o’clock”: the very best time to get down the beach and slug a refreshing shell-full of naturally sweet juice while watching the surf and enjoying a rousing late afternoon breeze off the sea. 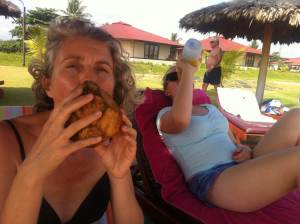 … better than any champagne cocktail on a hot hot Liberian day

The coconut water is so restorative, it’s like a meal in itself when I’ve been too unwell to eat. Scooping out the litchi-soft flesh from inside the two halves with the crown afterwards is a bonus. But if you dawdle, spend just a few more minutes at the deck on this email or that paragraph, the glory fades, the sun dips and you’ve missed the moment. It’s nearly 5pm and time to get inside and zip the screens up before the mossies come out to play. At 6pm it’s getting dark again. Coming back to the truck from Cape Town has made me aware of the effects of the passage of time on my body since we were last travelling: how much slacker my muscle tone is; how much harder it has been to readjust to handwashing the towels and scampering up and down the ladder. Once again I am grateful to this trip for allowing me to take note that the late summer of my life is turning to autumn. I am savouring these golden fun moments of coconut o’clock with my children before they become adults; with my husband before we become irredeemable old gits. On 20th November, 3 new cases of Ebola were reported in Monrovia, a 15 year old boy and two other members of his family. So far, nobody is quite sure how he got infected, but possibly through a blood transfusion to his mother, who has survived. On 28th November, Guinea’s last Ebola case, a baby girl, left hospital. We had been hoping to be on our way to Ebola-free Sierra Leone by now, but frail bodies have delayed us once again: Sampson managed to crack a rib getting bashed by his board in the surf ten days ago and hasn’t been cracking many jokes since. This week he’s managing to filter oil with the help of Charles, whom I met on the beach last time we were here, but he’s still not up to any heavy driving.

Charles and Sampson unloading dirty oil from the roof… 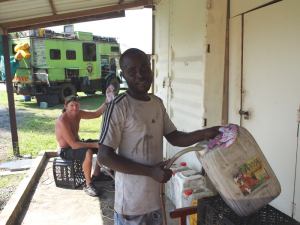 …ready for filtering in the shade

I’m supremely thankful to Probio for their gift of liquid digestive probiotics which is helping my immune system combat the post-antibiotics fall-out, which includes an outbreak of ringworm (not a worm but a nasty persistent fungal infection on my torso and arm) in exactly the same place I got it last year post-malaria-and-typhoid. But if you’ve got to be stranded somewhere, you could do a lot worse than a fabulous resort like Kendeja! We are so grateful to Rod, Eric, Theo and the team for their indulgence – Capetonian Chef André has even taken to dropping off a loaf of his fresh homemade bread at the truck. Zola has developed a good friendship with the impeccably polite Melvin, who’s a surf coach when he’s not at school. If they’re not in the water, they’re playing pool. We thank Melvin for being such a kind pal and superb role model for our son, and don’t suspect him of ulterior motives at all. 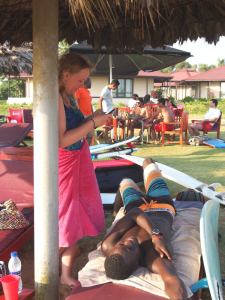 Hanging out at the beach with Melvin, after doing her exam (Monday wasn’t a public holiday for school-going Sampsons)…

…my beautiful daughter and her proud Dad

Our charming friend Roy, chief beach attendant, takes the concept of spick and span to a whole new level; Kendeja’s beachfront is possibly the cleanest along the whole West African coast. Although the upcoming funeral of his mother is uppermost on his mind, he was so thoughtful as to bring a tiny bottle of his favourite Chinese embrocation to ease Sampson’s bruising, and two more when he loved it so much he over-applied as usual. Sampson’s motto has always been ‘More is more’. 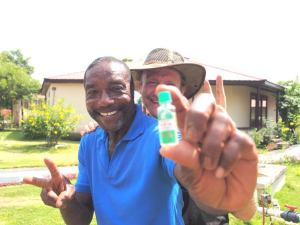 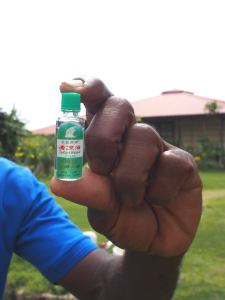 Roy and his maintenance partner Boima Rogers – yes, they are known as Roy-Rogers – have been kept very busy as 29th November is a public holiday in Liberia. It’s President Tubman’s birthday and unofficially “Beach Day”: everyone dresses up and goes to the beach to have a crazy party to celebrate the end of the rains and the beginning of high season. Kind of like the Fish Hoek Spring Splash but much, much hotter. This long weekend Kendeja has been honouring President Tubman in style. They broke all records on Sunday, turning 390 covers and surpassed it on holiday Monday with more than 400. At one point there were so many people in the pool, it was like watching a human sardine run. I don’t know what the hip crowd of indigenous Lebanese youth, elite Liberian families and Chinese, Indian and European ex-pats enjoy more: the sophisticated surrounds, or taking selfies on their cell phones in them. I do know that matching short shorts with wide-brimmed straw hats in bright colours and big sunglasses are very ‘in’ this season in high society Monrovia.

…and this was before it got crowded… 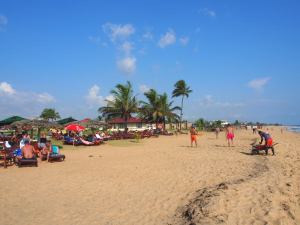 Later on, even the beach was chock-full

Globally, 29th November saw mass participation in Climate Change Marches all over the world ahead of the November 30th kick off of COP 21 in Paris. If you’re not sure what all the fuss is about, read this or if you only have a minute, check out the super-informative cartoon on the live feed at 10.59. I can’t believe that Sampson took the first version of the Africa Clockwise climate change awareness comedy show to COP 17 in Durban way back in 2011. After the disastrous lack of a binding agreement at COP 15 in Copenhagen in 2009, many activists are optimistic about COP 21 and agree with President Obama that, finally, 2015 may be a “turning point” towards heading off total catastrophe if participants can commit to reducing emissions to keep global warming below a 2˚ increase. This is mostly due to China’s about-turn in the intervening years, not unconnected with the increasingly common situation of crippling pollution like they had in Beijing yesterday, with air quality readings off the scale. Today Delhi is even worse apparently. Obama has said we are the first generation to witness the devastating effects of climate change, and the last generation capable of curbing it. On the one hand it is terrifying that this is the biggest crisis facing us in our lifetime and so many of us are still in denial or oblivious to the import of this event. On the other hand, it is inspiring that the leaders of 147 countries can get together in a room with the intention of sorting something out to the benefit of everybody on the planet. Makes you think that if they can do it once…. The northern hemisphere tends to take their long dusky summer evenings for granted but in Africa, Asia, and the islands of the south Pacific we see clearly that the day is nearly done. We pray their leaders will seize the moment at COP 21 and not squander this final opportunity to avoid the kind of future that would make today’s extreme weather events and refugee numbers look like a storm in a teacup. It’s coconut o’clock for the climate change negotiators, and we in Liberia raise a toast to them and wish them all the luck in the world.