We have lift off!

Well we finally made it. Yesterday the Big Green Truck pulled out of Cape Town into a glorious sunset like some sort of movie ending. Our Great Escape.

The weekend had been horribly frustrating. Everything that got fixed on the truck seemed to cause something else to break or malfunction. After a broken lift pump pre-filter bulb was replaced at Sandown Motors, we were all set to leave on Sunday, but, just as the bike rack was secured, the solar C-Tek battery charger failed. Sampson was starting to feel cursed and wondering how we were going to replace such an expensive bit of kit. However, it turned out that a sensor left dangling out in the sun had overheated and cut out – the power came back on when it cooled down!

Thanks to stalwarts Roger, Martin, Max and Pierrot who worked the whole weekend to get Big Reg on the road. We really wish we could strap you to the roof and take you with us… 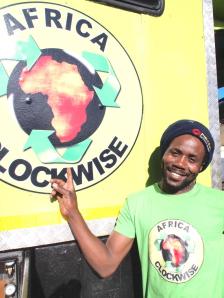 It’s embarrassing to keep bumping into people you’ve already said goodbye to. On Saturday, the kids and I did a mammoth shop while waiting for Sampson to come back from Sandown. Everyone I met in the mall said “Are you still here??” Even people who didn’t know us gave us strange looks as I piled two trolleys with assorted tins on promotion – about 70 of them. It took me an hour to fit R3000 worth of canned tomatoes, beans, teabags, Marmite, peanut butter, lentils, rice, pasta and pap into our two grocery cupboards. I’d left them empty till the last minute because these are also the electric wiring cupboards. When the solar system failed the next day, I had to unpack them all again. Joy.

But Monday 1st July was a new day. It dawned clear and cold, a perfect Cape winter day of bright sun and bitter wind. We’d learned our lesson and were more cautiously optimistic as we set out on our last visit to De Gama Motors to check that sticky lift pump. After getting the all clear, we dropped our hire car back in its garage (thanks Mom), took tearful farewells of Pierrot and Rebecca, and drove out of the south peninsula over the mountain. We just managed to get across Cape Town to Dolphin Beach in time for that classic last-look-back shot towards the city with cloud piling over Table Mountain in the golden light of 5pm. Sampson was racing to pull the Panasonic camera out of his secret cupboard, and there was no time to check the instructions so we hope it worked!

Ruby and Zola and Table Mountain

Bizarrely, we met Jesse and Len whom we parked next to last weekend in Muizenberg walking Ruby their dog – hope to see you in Lagos Len!

Finally, as dusk was falling, we drove up the R27 out of town, all four of us in the front, with the children cuddled together on the bench seat behind us in the cab, so we could hold hands. We gave a great cheer when a sign at the city limits welcomed us to the ‘West Coast’. Not many people taking this road are about to embark on a crawl up the west coast of the continent as well as the country.

After a hasty supper of leftover dahl and rice an hour or so later, the kids went to bed in their ‘room’ in the nose cone, I got down to some work and Sampson drove on into the night, glad of our Hella spotlights, determined to get a few more kms under his belt before calling it a day. Of course the lure of a morning wave at Elands Bay helped his motivation. What a treat to wake up here by the misty beach. For the first time in months I lay in bed and felt calm. We’ve made it. We’re Away.

9 Responses to We have lift off!